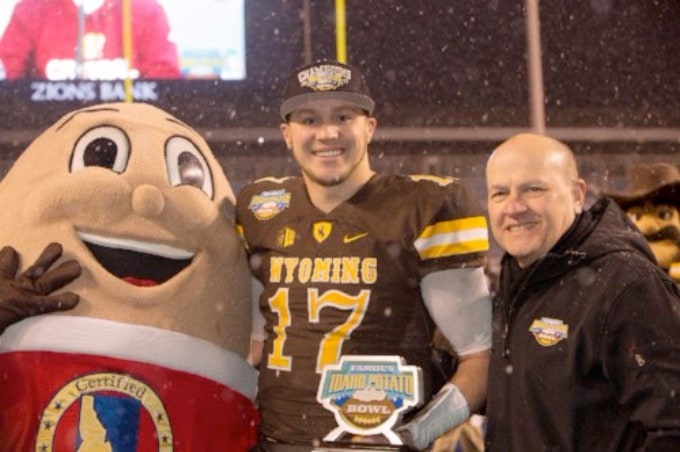 Boise, ID, December 28, 2017 – From the moment the Wyoming Cowboys mascot, Cowboy Joe (a young pony with a big spirit) trotted onto the blue field at Albertsons Stadium in Boise, Idaho, it was “game on.” The Wyoming Cowboys, representing the Mountain West Conference, defeated the Central Michigan Chippewas from the Mid-American Conference 37-14 in the country’s premier cold-weather college bowl game with close to two million fans around the country watching it live on ESPN.

“Wyoming and Central Michigan each played a fantastic game, and I have no doubt they were fueled by the support of their schools who sent marching bands and cheerleaders, as well as the thousands of dedicated fans who weathered the cold to cheer on their teams. All in all, it was a fun and exciting game – the cheer teams even included Spuddy Buddy in a cheerleading stunt,” explained Frank Muir, President & CEO, Idaho Potato Commission (IPC). “After seven fantastic years as the naming sponsor, I’m proud to announce that the Idaho Potato Commission will remain the naming sponsor of the Famous Idaho® Potato Bowl for another five years.”

Many NFL eyes were on this high-profile game. Several NFL representatives, including John Elway of the Denver Broncos, were at the game identifying players to potentially add to their 2018 lineup, including Wyoming quarterback, Josh Allen. Allen threw 154 yards and three touchdowns, received the MVP Award and officially announced that he will be entering the 2018 NFL Draft. Additionally, four NFL players, who either played in the Famous Idaho® Potato Bowl during their college career or graduated from Central Michigan or Wyoming, Tweeted their support:

Every year the IPC personalizes its sponsorship package to strengthen the Idaho® potato brand at the game:

Established in 1937, the IPC is a state agency responsible for promoting and protecting the famous “Grown in Idaho™” seal, a federally registered certification mark that assures consumers are purchasing genuine, top-quality Idaho® potatoes. Idaho’s growing season of warm days and cool nights, ample mountain-fed irrigation, and rich volcanic soil give Idaho® potatoes their unique texture, taste and dependable performance, which differentiates them from potatoes grown in other states.