EAGLE, ID, January 24, 2012—In the final seconds of the Famous Idaho® Potato Bowl, the Ohio University Bobcats (OU) defeated the Utah State University Aggies (USU) by a single point. While both teams played a "spudtacular" game, the Idaho Potato Commission (IPC) was perhaps the biggest winner, scoring more than 4.3 billion media impressions – and counting – as a result of multiple marketing initiatives that supported the college bowl game.

"We could not be more pleased with our sponsorship of the Famous Idaho® Potato Bowl," said Frank Muir, President and CEO, IPC. "This single event generated positive and consistent media coverage for the Idaho potato brand over a five-month period. It also served as a platform to help us communicate the importance of the potato industry to the state of Idaho. Idaho® potatoes generate more than $4 billion in revenue and provide more than 30,000 jobs. Potatoes are among the primary reasons that Idaho is one of the most fiscally-sound states in the nation." 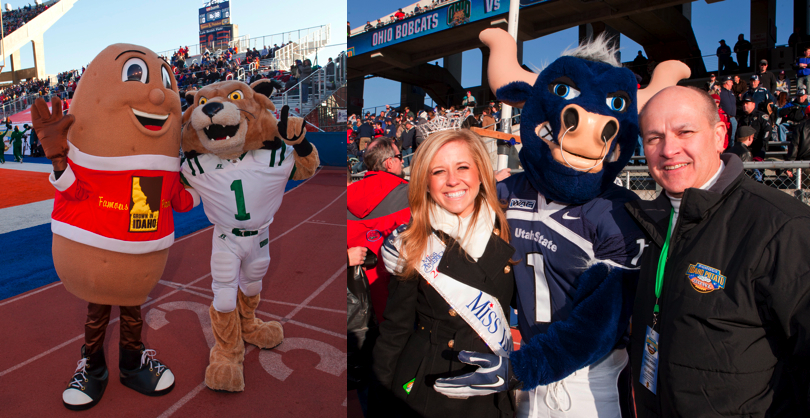 Frank Muir, President and CEO of the IPC (far right), Miss Idaho Genevieve Nutting (center) and Spuddy Buddy all played an important role in the festivities at the inaugural Famous Idaho® Potato Bowl.

The Famous Idaho® Potato Bowl was televised on ESPN and attended by over 30,000 fans. As part of its sponsorship package, the IPC received extensive recognition during the game and throughout the stadium, including:

The IPC rallied consumers around the country to embrace the spirit of the inaugural Bowl throughout the fall with several initiatives, including a special tailgating recipe page on idahopotato.com, a vignette with culinary icon Mr. Food, and an all-expense-paid trip sweepstakes awarded to Michael Warnick of Las Vegas, who attended the Bowl with his wife, Rebecca.

In addition, the Great Big Idaho® Potato Truck, "the largest potato on wheels," made its national debut at the Famous Idaho® Potato Bowl. Muir, several members of the IPC and Miss Idaho 2011, Genevieve Nutting, welcomed members of the press and fans alike for a press conference and photo opportunity. In ceremonial fashion, Miss Idaho christened the Truck with a breakaway faux champagne bottle.

Weighing in at more than 12,000 pounds, the 48-foot long, 12-foot wide and 11.5-foot tall Great Big Idaho® Potato Truck will travel across the country later this year visiting customers, stopping by trade shows and meeting millions of Idaho® potato fans along the way. In celebration of the IPC's 75th anniversary, the truck will also help raise awareness and funds for the Meals on Wheels Association of America. "We've always believed in the importance of giving back to the community, especially this year. We know 2012 is going to be huge for us – literally – as the Truck makes its way across the country and returns home to lead us into another exciting Bowl season," added Muir.

About the Idaho Potato Commission
The Idaho Potato Commission is a state agency that is primarily responsible for expanding the markets for Idaho-grown potatoes through advertising, promotion and research. The Commission also protects the use of the “Idaho® potato” and “Grown in Idaho®” seals, which are federally registered Certification Marks that belong to the IPC. These Marks ensure that consumers are purchasing potatoes that have been grown in the state of Idaho. For more information, visit www.idahopotato.com.

About the Bowl
The Famous Idaho® Potato Bowl recognizes the positive impact teams, coaches and student-athletes have in their communities and their leadership roles in promoting humanitarian efforts. Each year, the Bowl generates over $1 million in direct economic impact for the facilities and charities involved. For more information, visit www.famousidahopotatobowl.com.