Why are restaurants still wrapping their potatoes in foil? 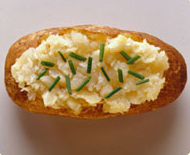 The history behind this phenomenon is that operators felt that they had to dress up the lowly spud to make it more attractive to their customers.  So a chef grabbed some aluminum foil (invented around 1910 to replace tin foil) and covered up any blemishes in the outer skin of the potato, hiding any inferior appearances, and put them in the oven.  Somewhere along the way (probably a myth started by aluminum foil companies) people began to believe that baking a potato in foil was a quicker way to cook the potato.  Now this may work for other food products, but I have reason to believe it makes hot fluffy baked potatoes into something Mother Nature never intended.  Did you know that wrapping a potato in foil prior to baking traps the potato’s natural moisture, steaming instead of baking it?  This results in a soggy baked potato, not the light fluffy Idaho® potato baker that customers prefer.  Also, Idaho® potatoes are best when baked until they reach an internal temperature of 210°F — this takes between 55 and 60 minutes in a conventional oven at 425°F or 50-55 minutes in a convection oven at 375°F.

Wrapping potatoes in foil does not hasten baking.  On the contrary, since the foil itself has to be heated before the potato begins to bake, cooking times increase slightly.  We did a study once with Kitchen Consultants and their company found that the foil wrapping slowed down the cooking initially until the inside of the potato actually started to get heated.  While the potato in foil then started to speed up the cooking process, it was typically (depending on the size of the potatoes as a 90 count bakes faster than a seventy count) ten minutes behind just placing the potatoes on a rack or on a sheet pan.  By the way, DO NOT pile up the raw potatoes into a deep steam table pan and place in the oven, the outer potatoes and those on the top will be over baked by the time the ones on the second or third layer are only partially done.

Not only do you get better baked potatoes when you bake them unwrapped, you also save money.  Here is what we tried:  Three different people were timed while foil wrapping one case of 90 count potatoes.  The resulting average was 13 minutes.  With the Federal minimum wage at $7.25 per hour, this translates into approximately $1.57 per case in added labor.  The foil sheets, averaging $.016 each, times 90 sheets is $1.50.  Cost calculations show that eliminating foil saves an average of $3.07 per 90-count carton of potatoes, including labor and foil costs.

If you need to hold potatoes for more than a few minutes before serving, I recommend foil-wrapping potatoes ONLY AFTER BAKING.  Potatoes can be held at 180°F for up to 45 minutes when wrapped hot from the oven, if kept in a warming drawer or heat-proof cabinet.

We tried placing finished potatoes in steam tables, under warming lights, etc. to keep the temperatures high enough to have a quality baked potato.  We found that the best method for holding a baked potato is in a warming drawer.  The second best method is a heat-proof cabinet, where foil wrapped potatoes can be held for 45 minutes, but with an interior temperature loss of about 20°F.  The least effective is the use of heat lamps.

For take-out lunch or light entrée service, try baking potatoes in a traditional or convection oven until almost fully baked, then finishing in a microwave oven just prior to service.  Cooking times will vary depending on your oven type, potato sizes, and quantities.  Microwave finishing can prevent overcooking and lets you serve customers a fluffy, hot Idaho® potato.