With 883 posts, chances are there's already an answer to your question. Please try searching below before submitting a question to Dr. Potato. Use multiple words to help narrow down the results. For example, search for "potatoes" and "group" if looking for an answer on cooking potatoes for large groups.

Just Say NO to Wrapping Potatoes in Aluminum Foil

Someone told me it is bad to wrap my potatoes in foil before baking. Why?

Wrapping a potato in foil prior to baking traps the potato’s natural moisture, steaming instead of baking it.  This results is a soggy baked potato, not the light fluffy Idaho Baker that most people prefer.  Also, Idaho® potatoes are best when baked until they reach an internal temperature of 210°F – between 55 and 60 minutes in a conventional oven at 425°F.  Wrapping potatoes in foil does not hasten baking.  On the contrary, since the foil itself has to be heated before the potato begins to bake, cooking times increase slightly.

Not only do you get better baked potatoes when you bake them unwrapped, you also save money.  Cost calculations show that eliminating foil saves an average of $3.00 per 90-count carton of potatoes, including labor and foil costs.

I recommend foil-wrapping potatoes ONLY AFTER BAKING if you need to hold potatoes for more than a few minutes before serving.  Potatoes can be held at 180°F for up to 45 minutes when wrapped hot from the oven if kept in a warming drawer or heat-proof cabinet.

Note for Restaurants:  For take-out lunch or light entrée service, try baking potatoes in a traditional or convection oven until almost fully baked, then finishing in a microwave oven just prior to service.  Cooking times will vary depending on your oven type, potato sizes and quantities.  Microwave finishing can prevent overcooking and lets you serve customers a fluffy, hot Idaho® potato. 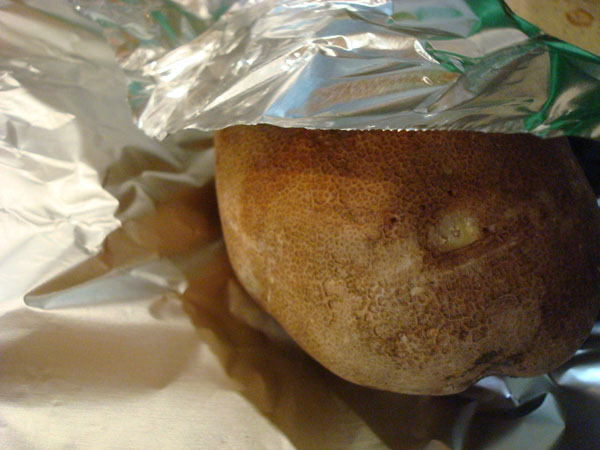