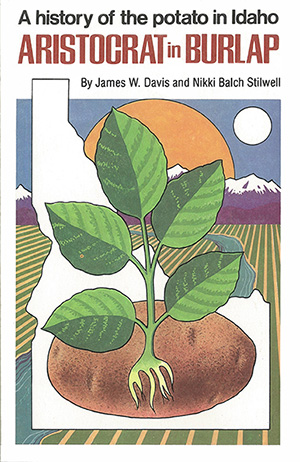 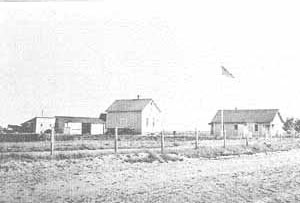 An early view of Aberdeen experiment station.
The first year, the experiments with potatoes were considered the most successful and still more than sixty years later, potatoes are the most important crop in terms of the number of research projects being conducted.

Two of the earliest experiments concerning potatoes involved the distance between each plant and between each row, and the size of the seed piece.

According to the annual report of 1914, the potatoes were planted by hand in furrows made by using a plow. "Accurate planting was insured by using a tape with distances marked off by use of strings tied at proper distances marked on the tape . . .. The potatoes were harvested with a Pugh digger, stored in the new potato cellar, and sorted after other fall work had been finished. Sorting was done by hand over a machine especially constructed for the purpose. The ordinary potato sorter was not used on account of bruising the tubers."

The results secured from the distance-in-row experiment were most interesting in that they showed that cut potatoes planted at distances up to and including 20 inches apart in the row gave greater yields of marketable tubers than whole tubers planted at these distances.

The first year that there was an appropriation for specialty work in the field of potato research, James Kraus was hired to work at Aberdeen. During those early years, experiments were concerned with the seed piece sizes, potato cellars, cold storage regulated temperature, bruising, and fertilizer and phosphorus levels. Dr. Kraus eventually became the dean of the College of Agriculture at the university.

One of Kraus' principal projects at the Aberdeen Center in those early days was to research the cause of knobs on Russet potatoes. Experimentation showed that it was a top-tuber ratio problem where too many leaves were feeding starch into too few tubers. It was discovered that planting seed closer together to reduce the number of leaves substantially curbed the problem.